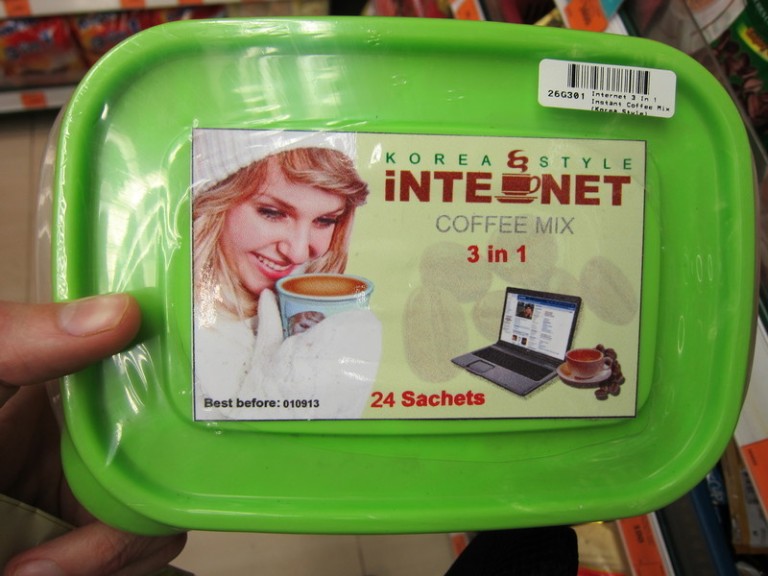 As Myanmar negotiates its path to modernity, inhabitants are deliberate in adapting signs and behaviors that indicate their modern status. One such affectation is the consumption of coffeemix.
One could argue that coffeemix is so widely favored for its convenience of preparation (all that’s needed is hot water) or for its low price (prominent billboards brag of their brand of coffeemix costing a mere 52 kyats, or US $0.65). With packets of instant teamix available at practically every retailer that sells instant coffeemix, however, oftentimes it is possible to purchase  powdered teamix wherever powdered coffee is being sold. Thus, there must be other factors at play besides availability.
On this packaging there is a connection made between coffee and its consumption with modernity, tech savviness, and global cosmopolitanism. For cosmopolitanism, although the use of the blonde woman is heavyhanded (and the reproduction of her face on the mug that she is drinking from rather surreal/creepy), note also “Korea Style” (written above “iNTE{R}NET”). This “Korean connection” is a theme that can be seen across many products and services hoping to align themselves with all that is “modern” in Myanmar today. Myanmar looks to Korea as a model for modernity, mostly on account of the prolific amount of Korean soap operas and historical dramas that air on Myanmar television.
Also made notable by its absence is the complete lack of Burmese (not to mention Korean!) writing on the packaging. Although nominally “Korean Style”, the lingua franca of the modern world (at least in the eyes of Internet Coffeemix’s marketing department) is English.
Finally, the packaging norm illustrates the association in Myanmar between the level of packaging and the relative modernity of the packaged item. Although certain cultures have had their behavior towards packaging dissected and analyzed in the hopes of forming conclusions about that culture as a whole (i.e. Japan), in Myanmar the trend is progressing towards “more is better”, with plastic the preferred packaging medium.