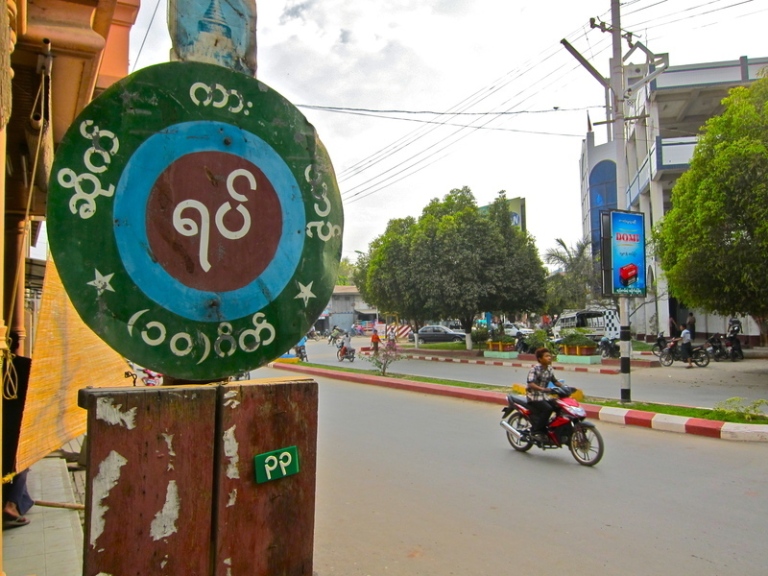 The colorful sign reading “Sidecar station : Gate 10” is attached to a board with nails for a sidecar pilot to hang their number (the word in the middle of the bulls eye reads “Stop”). All sidecars whose main territory includes downtown Sagaing have their own plastic card, and the order of the queue takes shape on the signboard itself based upon the sequence in which sidecars arrive at the stop and hang their cards. The girl shown sitting in the parked sidecar approached the stop and called out “sidecar!”, whereupon the owner of the restaurant who happened to be sitting nearby called out one of the sidecar pilot’s names, causing the sidecar pilot (number 36, according to his tag) to wheel over his steed.

This system has several advantages over the jumble-based queue that is the norm at sidecar stops. It eliminates the need for all queued sidecars to inhabit the same area, which, in this space-constrained alleyway off of the main boulevard, allows for smoother pedestrian traffic. Sidecar pilots may park their vehicle and themselves in whatever available space they choose that is within shouting distance of the gate. This queueing system also frees sidecar pilots from depending upon their own recollection/opinion as to the queuing order (assuming buy-in on the part of all queued pilots, and that each has an equal stake in this system functioning smoothly). I’ve never seen such a system in Yangon.