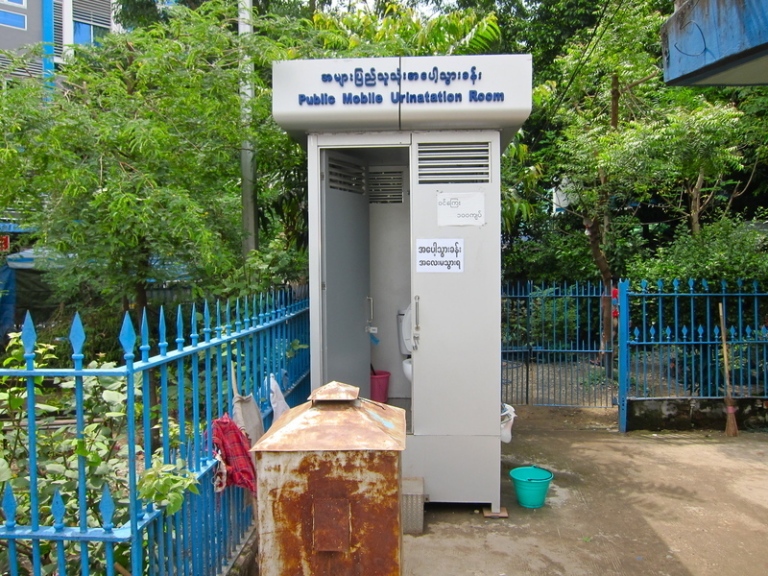 “Room for peeing – do not poo”

(In Burmese, the word for urine translates as “light”, while feces is translated as “heavy”, thus making it a “room for light – not for heavy”)

First question: Wha…? Second question: Why here? My (debatable) take is that the lack of public space in Yangon (parks are both scarce and require an entrance fee) means that places that are not otherwise designed to function as public space are pressed into service as such. In this case, this “Public Mobile Urination Room” (or PMUR, pronounced “Peemur”) happens to be located next to Sule Pagoda, the temple that forms the ostensible nucleus of downtown Yangon. Visiting the temple on a date with one’s lover is a common practice (as temples are, critically, free to enter (for citizens of Myanmar at least)). Also, once one has finished visiting the temple and wants to linger afterwards (assuming one is on a successful date and not just a routine visit to make merit), there is a relatively desirable slice of public space for lingering in to be found in the overpass that connects the adjacent sidewalk to the island in the middle of the traffic circle upon which Sule is constructed. Sure, it may be cramped, noisy, lack formal seating options, and expose the lingerers to a constant barrage of vehicle exhaust fumes, but remember: visibility from the street is obscured by the structure of the stairs, and one cannot beat the price. Setting up a charge-to-access toilet is perhaps an acknowledgement on the part of city planners (assuming this toilet is publicly owned and operated – otherwise a whole new set of very interesting implications to consider) of the lack of functional public spaces for people to spend prolonged time in – and the implicit approval of this informal area around the pedestrian bridge as an acceptable public space. How long before ambient sensors or “smart sidewalks” can self-detect the sites where the greatest volume of people tend to informally relieve themselves? Such data could be plugged straight into a forecasting algorithm to determine whether establishing a pay-to-access bathroom at a given point would be worth the investment.

How was 100 kyats decided as the proper amount to charge for the privilege to urinate in a designated room as opposed to the sidewalk or the bushes? Is that price point attractive enough considering the service it offers and the “free” alternative behavior that one could engage in? Is this PMUR not actually intended to be a profit-making enterprise at all, but rather shame people who would normally relieve themselves there into going somewhere else (now that they are “guilty” not only of urinating in an inappropriate place, but now are also deprived of an alibi as to why they chose to do so instead of doing so in an approved space)? Is this just a “modernity prop” meant to convince the many tourists that wander past this point of the supposed cutting-edge sanitation practices that Yangon is embracing?

Also, I’m unsure what aspect of this structure is “mobile”, as attempting to move a building filled with urine sounds, well, somewhat complicated. If anyone has any other PMUR sightings, please do share.

2 thoughts on “Room for light (not heavy)”