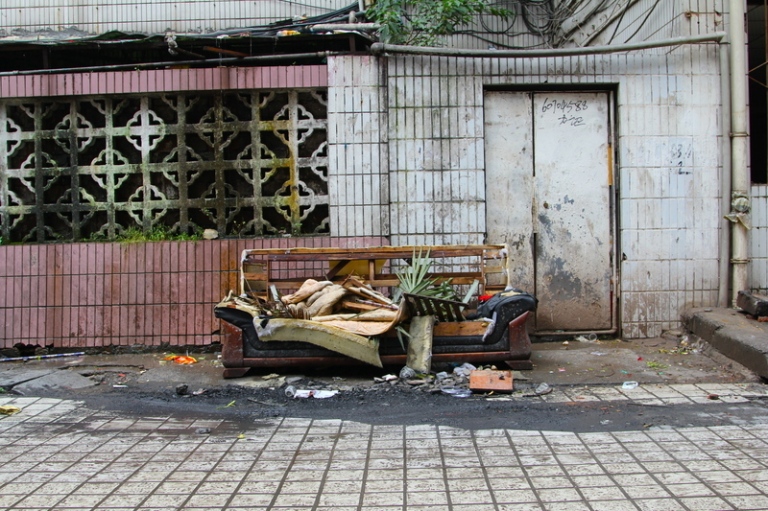 A slow-motion unfolding of the tragedy of the commons. Consider the speed at which this couch, a once-publicly used good has become what amounts to a garbage disposal point. Is this a signal that the couch is also ready to be removed (along with the accrued garbage)?
Consider the point at which a piece of public furniture such as this will have degraded past the point where you would consider it usable (without unpleasant consequences), and how subjective that point is across different cultural, socioeconomic, (+ etc.) contexts. Your “no thanks” might be another’s “looks fine to me, my legs sure are tired.”

By extension, the lack of fairness towards others when the decision to “scrap” a piece of public furniture is made by one whose standards are higher than others (or perhaps they just didn’t feel like making the trip all the way to the end of the street to dispose of their rubbish, or perhaps it was their couch and they were tired of people sitting outside their window and talking at loud volumes – I’m not one to judge). Or perhaps consensus was sought – a strong rainfall may have made the decision for the community.

How would this unfold in your context? How long would this couch last on your street? Consider your context’s reaction to someone placing a piece of furniture on the street: legal, social, (+etc.). The thin and subjective line between an activity being deemed “charitable/neighborly” versus “illegal/lazy”.

See also this, from GOOD (via NYT).