Follow enough construction vehicles around as part of your research in China and one eventually arrives at the built (and ever-expanding) edges. In observing small urban China up close in Heqing last week, the journeys between interviews/neighborhoods are often as engaging as the interactions between those journeys. A hitched ride on the back of a tractor was the ideal pace to experience the transition from Heqing’s mud-walled central alleyways out to its open frontiers of concrete and rebar. Motorcycle too fast, car too enclosed. After thanking my ride and some directed wandering, I encounter a driver parked at a construction site engaged in unloading rebar but nonetheless eager to talk – the usual half-scripted, half-exploratory/contextually specific question flow follows.

In a beautiful bit of serendipity, the manager arrives back on the job site as we’re wrapping up. To switch things up a bit, I decided to wear my big-lens SLR plainly in sight on this particular day (instead of tucked away in a pouch, as is my usual preference). He insists that I accompany him up on to the roof (as in, the beginning of the tallest floor they’ve built so far) so that I can photograph the view. We ascend, off on an impromptu tour through thickets of rebar, log-scaffolding, and PVC piping – the exposed sinews, nerves, and bones of this structure-to-be. Although what served as “stairs” were a still a work in progress, and getting on to the roof required a bit of scrambling, agility, and luck, the ensuing vista and conversations with workers there and on the way up justified it. One woman and seven men work under the cloudy afternoon sky.

After a few minutes of improv chats and offered cigarettes, my presence becomes unremarkable and I can just watch. For an observer, being no longer an object of interest often makes for the best observing. In the rush of the moment and the usual time constraints, it is easy to forget that letting your context (and its network of personalities, processes, and systems) grow comfortable with your presence is just as important as you growing comfortable being in that context. After driving hard at the primary research goals for an extended period, it proves therapeutic to veer off of your subject’s “straight and narrow” and widen the ol’ aperture of inquiry. A few themes that jumped out at me from this context (and that I enjoy returning to when the proper time and place beckon):

Where/why/how things are placed:
The hot water container and boiler are placed on a busy thoroughfare on the second-from-top floor, making them accessible to all but away from most of the dustiest activities and out of direct sunlight. Are the (conspicuously high end) cigarettes alongside the hot water area also public? Or just meant to highlight the status of their owner to all who come for hot water? The space containing tea, boiled water, and water boiling equipment as this context’s “water cooler” – coffee may fuel your context, but this isn’t Kansas anymore. 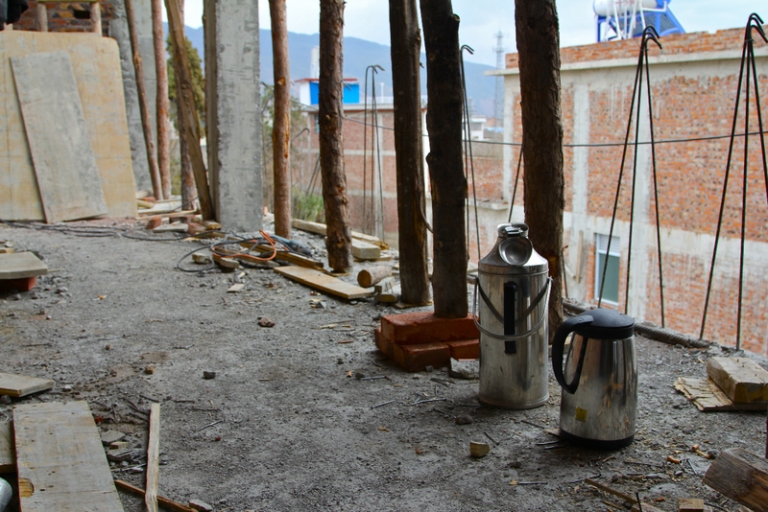 When not in use, lengths of string used for measuring/demarcation is wrapped around a nail. Placement is at eye-level, or at least not-at-ground level, for visibility.

Where/how things are held/carried:
Tea: Tea is drunk all around, with everyone repurposing the same glass food container except for the supervisor/boss (who has his own decorated, purpose-made glass container). What kind of food container, though? Can’t quite tell, but it’s brought to you courtesy of Chong Xing Co. The containers tend to gravitate towards the section of the building where its owner spends most of his or her time. Though it may be a status nod to the boss, I imagine that in a rough and tumble context such as this, heavy things being carried, etc., the lifespan of a glass (or even plastic) tea container would be quite short anyways, meaning best not to invest in one at all. As the boss man doesn’t lift much, his tea-carrying behavior proves the exception to the rule. If rebar holds the building together, consider the extent tea holds the team constructing said building together. What powers your team?

Pencils: While the “behind-ear tuck” is expected, having it sticking out from under the front of one’s cap (think “narwhal style”) is somewhat less so. Why? “It will never fall out that way,” he replies. Upon offering him a cigarette, it goes behind the ear, though, as he’s already smoking one. Different spaces and places, depending upon time and context.

The processes behind things being built/made, and the improvised tools and constraints that influence those processes:

Around these parts, the support du jour is wood (instead of bamboo). Not all pieces are of the proper length, however, so some modification is needed in some places (again, using available resources creatively – more images of this in a subsequent post). It wouldn’t be a Chinese construction site without some bamboo though, and I find one stalk mated with a bent length of rebar to function as an improvised hook.

When trying to find out what makes a square inch of context tick, simply being there to hear/watch it tick is vital to the exercise, and also happens to be why I live for this sorta thing.

One thought on “Tea + rebar”