Inscribed within each of these signs or marks or objects live desired, “ideal” behaviors for this context. They are encoded into the very fabric of the city itself – Lucerne, Switzerland, in this case. Of all the symphonies of signs and street-paint that aspire to direct and constrain behavior in the cities I live and travel in, something about being exposed to all that Lucerne considers sufficiently important to inscribe on the “skin” of its urban spaces stands out. Do all cities have as many rules as we see here, or is this a self-fulfilling stereotype about the Swiss love of precision and order?

In many cases this information gets lives on the ground itself, likely due to the the perceived lack of commercial attractiveness of that space, despite its high visibility (I imagine most established brands would like to think of themselves as deserving a place where they won’t physically be stepped on). That said, some brands go the opposite way and seek “street cred” by drawing, tagging, and stenciling themselves into our surroundings through chalk, spray paint, stickers, etc on the surfaces of streets, sidewalks, walls, and (sometimes highly contested/valued) billboards.

While this escalator has its fair share of directional stickers sporting guidelines and warnings along the sides in sticker form, there’s a fairly simple set of hard-to-ignore pictographic instructions on the ground right in front (which the present passengers, called “esca-lefters” in some places, appear to be studiously ignoring). Shanghai, too, has its fair share of prescriptions around how to ride this common element of the urban environment, although again most people seem happy to ignore them: 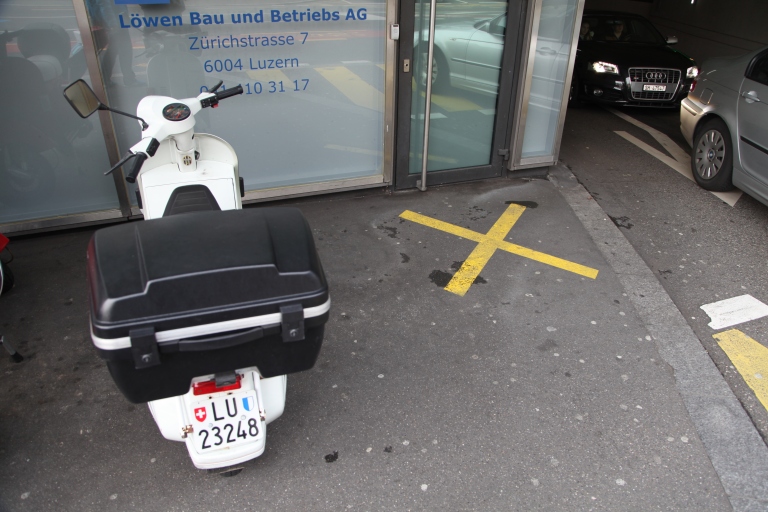 Taken out of context, a yellow “X” on the pavement was unfamiliar, based upon the cities and sidewalks I’d traversed in the past. Turns out it is meant to forbid a common behavior for this particular sidewalk that would obstruct the opening of this door (a behavior you can probably guess).

This pole contains directions for motor vehicles in the form of a sign mounted on top, and sports a mounted dispenser of dog waste bags. Beyond the surface-level function of this thing – dispensing dog waste bags – it also enforces the understanding about proper dog waste disposal behaviors around these parts. Yet another set of neat-looking set of zebra-stripes run behind it, despite the lack of vehicular traffic in this small pedestrian plaza on the outskirts of town.

An explicitly designated space for motorcycles, keeping them from haphazardly parking anywhere, and granting them prime positioning nearest the street corner (a subtle nudge towards smaller, more fuel-and space-efficient transportation). Lots of people talk about autonomous cars, fewer about autonomous scooters/motorcycles. How relevant will these designated spaces be when future two-wheeled transportation can be off running errands, being rented out, or refueling/recharging themselves whilst you are otherwise engaged?

A very specific demarcation of where one should wait before crossing the street – enough to make the New Yorker in me cringe. A closer look at the stripe itself also reveals some beautiful wear-textured letters, which could well have led to some confusion on the part of pedestrians. Am I supposed to wait in the space behind the line, or am I supposed to stand directly on top of the line? Following the pavement lines show that even the precise angle at which one is supposed to enter/exit the relatively quiet and unmarked adjacent side street have been accounted for by the thinner white line peeling off into the lane from the main yellow lane-division line.

Consider the tone of some of these warnings, as well as the warnings that surround you in your own context. Think about both the tone they strike and form they take; what are the dominant color palettes – “alerting” reds and yellows, or more sedate greens and blues? Are they framed positively to incentivize (“Please do X”, “X-ing is welcomed”), or negatively to dissuade (“Do not X here”, “X is forbidden”)? How would your context change if suddenly every sign were framed/phrased positively? 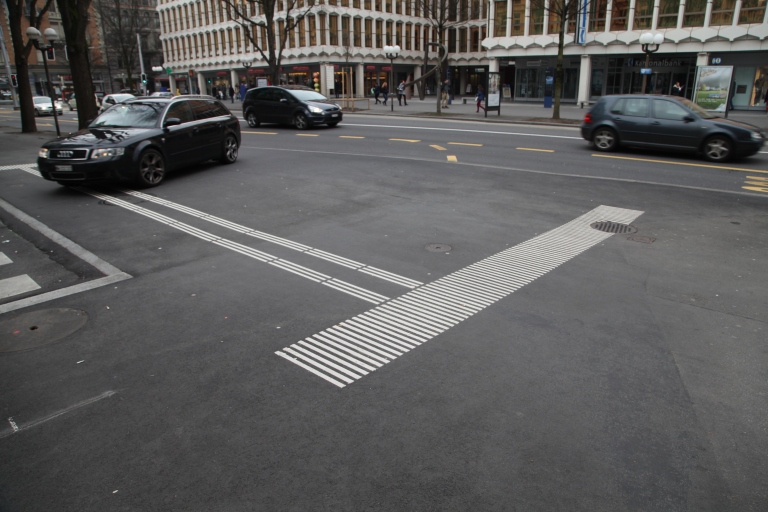 Finally, think about the numerousness of all these little rules. With all the breathless gushing about the “smart city”, not many (besides Adam Greenfield and a few others) have paused to ask to what extent will generous budgets and panopticon-aspiring city-states “weaponize” these desired behaviors? If your identity within a place is tied your bank account for taxation and identification purposes, what are the implications of being able to instantly identify and universally penalize any rule-breaker? Is this something any official (elected or otherwise) should be empowered to do?