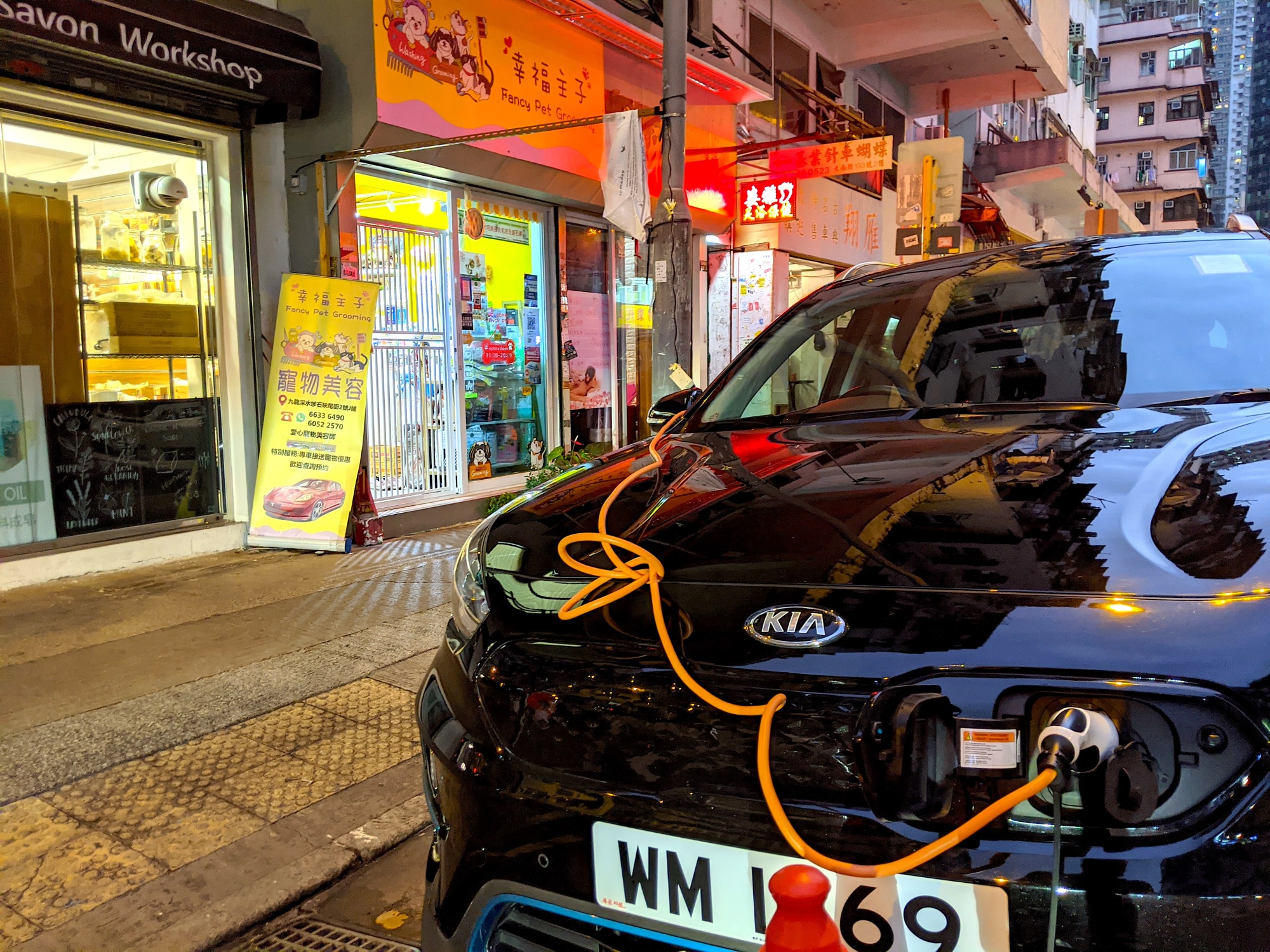 This is a lesson in how physical space can cement old behaviors into place and constrain new ones.

Hong Kong’s high density of electric vehicles (is there a Tesla-per-capita comparison somewhere?) is rivaled only by its high density of population, which in turn leads to a lack of parking spaces. This means that if you’re wealthy enough to be able to afford your own on-street parking space, but the vehicle you park in it requires charging, you’re likely going to need to get creative.

In this case, the owner of this plug-in Kia SUV has arranged a system that enables them to charge while parked by plugging into the wall of Fancy Pet Grooming. However, this system only works through a daily-chain of several extension cords, a bit of repurposed metal shelving that suspends the charger over the heads of (most) pedestrians traversing the sidewalk below, a (presumably) purpose-installed plug in the building’s exterior wall, and, for good measure, a pair of safety cones; one adjacent to the vehicle to keep passersby from getting clotheslined by the charger, and another placed in front of the vehicle to protect the charger (protruding from the front of the vehicle) from getting backed into by an overly optimistic driver hoping to sandwich their vehicle into the narrow space in front.

Being located in Sham Shui Po – a neighborhood that could still be termed “light industrial” – likely made both the skillsets and the materials to pull off this particular charge-hack more readily available (as well as the likely lower degree of surprise that pedestrians might express at having to navigate around such a thing).

Admiring the handiwork of this vehicle owner, the feel logic of “pace layers” seems to run beneath the surface of this creation (Noah Brier has a good breakdown of pace layers). This roundabout charging approach could be seen as an example of the tension that’s felt as the slower “infrastructure” layer drags downward on the velocity of the quicker-changing behaviors in “fashion” and “commerce” that motor vehicle configuration could be considered to fall under (although, perhaps naively on my part, it may be that the transition towards electric vehicles could end turn into a more “cultural” level shift – that is, taking a deeper and more enduring place into the foundations of human civilization).

Seeing this charge-hack also brings to mind something Bryan Boyer laid out in his wonderful Matter Battle essay, which I imagine the owner of this vehicle may have thinking about in one form or another as they pieced together this improvised charging system: “Because Matter Battles are ultimately about the inescapability of physical laws, they constantly remind us that no matter how high tech your implements, there is always room for basic failure…high tech tools always have low tech components somewhere in their workflow.”

Finally, consider how such a charge-hack might work in your context, if there isn’t a more ample formal charging infrastructure? What local materials would you have at your disposal if you had to rig together something comparable?