As I get into the swing of things here in the Middle Kingdom, I aspire to get back on the wagon with more routine longer-form updates on my research (as opposed to the tidal wave of Instagrams to which I’ve recently been subjecting everyone). In the meantime, as I make my apartment here in Chongqing more inhabitable I was reminded of an incident following a move-in from the past:

A faint knock on the door turned what would have been a drizzly evening spent at home into something more memorable. In the midst of moving into a new apartment in Yangon, I had forgotten that I’d scheduled a large vinyl poster to be delivered that night. As the trio of workers kicked off their flip-flops and filed into my apartment, weighed down with timber and tools, I realized their plan for getting a seven-foot wide poster across downtown Yangon consisted of simply carrying the frame and poster over in separate pieces and assembling it on site. It just so happened that, in this case, “on site” was my living room. 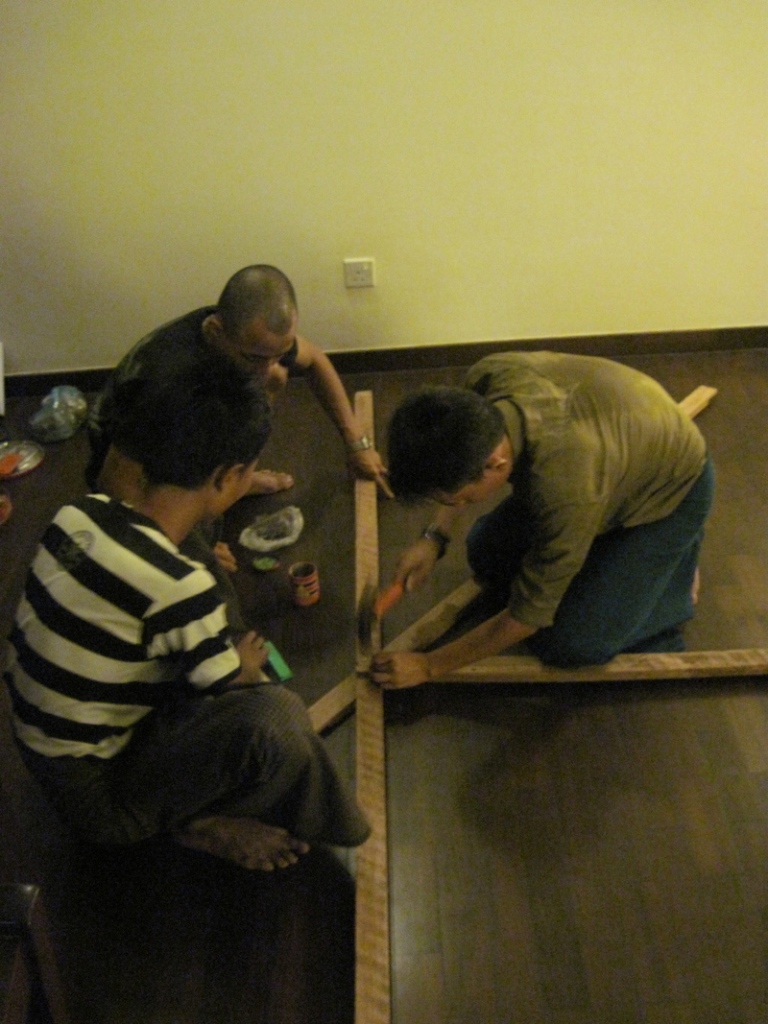 After several minutes of hammering, sawing, and general ruckus-raising, a neighbor knocked on my door to inform me, using not so necessarily kind words, that he considered the process somewhat noisy, and wondered whether the team couldn’t assemble the poster somewhere that wasn’t in an apartment directly next to his. We obliged, and adjourned down to the basement to continue the process there. After a half hour of steady work, the team and I had managed to build the frame, staple the poster to it, and – most challengingly – negotiate the poster up the five flights of stairs to my apartment. Now, for the final step: mounting the poster on the wall. After some brief discussion, we decided that the poster’s considerable size and weight meant the best tactic for hanging it was to drill screws into the wall and suspend the poster from them. There was only one problem: my apartment lacked a suitable outlet for their drill’s plug (which was for some reason set for use in Australia and featured a pair of narrow, angled prongs), while the outlets in my apartment were all configured for other plug styles. Naturally, I lacked the proper adaptor, and there was silence for several seconds as our minds raced to address this seemingly-minor-yet-critical problem.

The supervisor had a bolt of insight: Grabbing the plug at the end of the power cord, he produced a razor and neatly sliced that end of the wire off, tossing aside the plug and cutting away at the vinyl coating to expose the pair of wires within. Handing the two exposed wires to his assistant, the supervisor grabbed the drill and directed his assistant to plug the wires into the two available holes of the nearest (UK-configured) outlet while he stood upon an adjacent chair to drill the holes.

It was at this point that I distinctly remember regretting delaying my decision to purchase a fire extinguisher.

Amazingly, the drill functioned as normal, and nobody ended up cooked. Still, the supervisor would likely not have elected to cut the end off of his drill if he had had the choice. It was the lack of compatible outlets that drove him to sacrifice the functionality of his drill – although one could argue that, were a wire-holding assistant always available, he had just created a universally compatible power drill.

The plugs in Yangon are a seemingly random combination of all possible options, and a given outlet may feature interfaces for multiple plug types. A place’s “standard” plug conveys that context’s particular history, as the most common type of plug may ends up being from the country that once occupied/colonized a place, or from whom electrical goods were first imported for use there. Think of places like Myanmar that lack a standard, or, depending upon how you frame it, has many “standards” – how has their past dictated their present in these terms? Will a “standard” emerge in Myanmar’s future based upon what happens in the present?

Zooming out, how are we all progressing towards a common standard? Here, I don’t mean a world of only one type of plug and one voltage – I mean a world without any plugs or concepts of “voltage” whatsoever. Considering recent technological advances, how far off is universal wireless charging? After that, how far off are we from forgetting what plugs and wires ever were? From a colorful past of many plugs and multiple voltages, how far off is convergence upon a true “standard”? Why is/n’t this “good”?