The punctuation marks that accompany a given journey change by context, though tend often to involve food and drink in varying ways. In China, this is even built into sayings, such as 上马饺子下马面 (“Dumplings when mounting the horse, noodles when dismounting the horse”). Along many journeys in China, the way always seems punctuated by the presence – nay, the near ubiquitous availability – of boiled water.

Although such ubiquity was initially likely to have arisen through the desire to have the means with which to brew one’s own tea, today it has taken on the additional role of being able to provide nourishment at short notice thanks to “convenient noodles” (or “fangbian mian” / 方便面 ). The airport in Lijiang is no exception, where the noodles are always fresh from the wax paper cup and the tea (leaves are gratis) is always piping hot.

Journey (and ritual, for that matter) being a rather broad term, consider a somewhat different one that takes place weekly in the adjacent province of Chongqing. On a micro-level, these men are on a journey several kilometers down the swiftly moving current of the Jialing River, engaged in a broader journey towards maintaining physical fitness. Setting off from the banks of an island that is typically submerged in the middle of the river during the cold season (but becomes a vibrant park in the summer months when the water recedes), this group of friends navigates the surging current together. 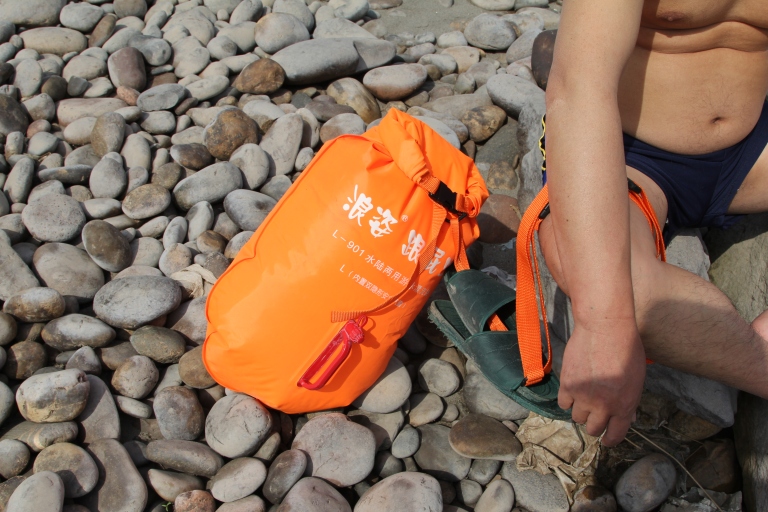 Before stepping into the water, however, as a group they engage in their pre-departure ritual. They walk down to the water’s edge, step out of and fold their street clothes, bundle them up, and place them in their identical fluorescent orange dry bags. In their bathing gear they search for a relatively calm point at which to enter the stream. They stretch. Each of them kicks off their flip-flops and weaves the carrying strap of their bag though them, securing them fast. They then close their bags in such a way as to trap as much air as they can within the bags, loop the bags around their bodies, and wade into the river. Asking about their journey, one of the swimmers points off into the distance towards a pier jutting into the water – their usual destination for their afternoon swim. When they step out of the water on the other side, they’ll often sit down for a small meal and tea at a restaurant nearby the pier, close to the neighborhood in which they all live.

Contrast this pair of journeys – one powered by jet fuel and the other calorie-powered, one occasional and the other weekly, one lasting a handful of kilometers and the other taking you perhaps thousands of miles over mountains and oceans. For each, a specific “moment of no return” – the “thunk” plane door sealing shut, the feeling of the smooth river stones on your feet as you feel the current begin to tug at you. Circling back to ritual, each of these distinct journeys touches upon a service – whether one takes one’s tea and noodles (or dumplings, if you’d prefer) beforehand in the dull roar and fluorescent light of the departure gate, or in the teashop wedged into the narrow, mossy alleyway, a cloud of cigarette smoke circling your table as your legs throb with gratitude from the successful fight against the river. One signifies the start (or midpoint, depending upon your perspective) of a journey, the other its successful completion. For both, the meal is as much about satisfying a biological need as it is about marking one’s progress – a setting forth for the airline passengers, and an arrival for the swimmers. Both are enjoyed in moments of relative “calm after the storms” – the airline passengers have packed, navigated to the airport, traversed security, and found an open seat in the departure gate. The swimmers arrived at the island, read and then battled the currents, and emerged victorious on the other side.

Consider how the ritual of sitting down for a meal fits as a piece into the larger process of your own past journeys – whether to your office, or to the far side of the world, from a cheese Danish bought at the corner bakery on your way to the morning bus, to the comfort of a Mocha Soy Latte (or, depending upon the season and climate, perhaps a Frappucino) in an unfamiliar new land. Consider also where the border lies between a comfortable habit and a required ritual, and how the shifting of place can force a given food or drink ritual from one category to the other.

When a journey is underway, how certain services are identified along the side of the road in China.