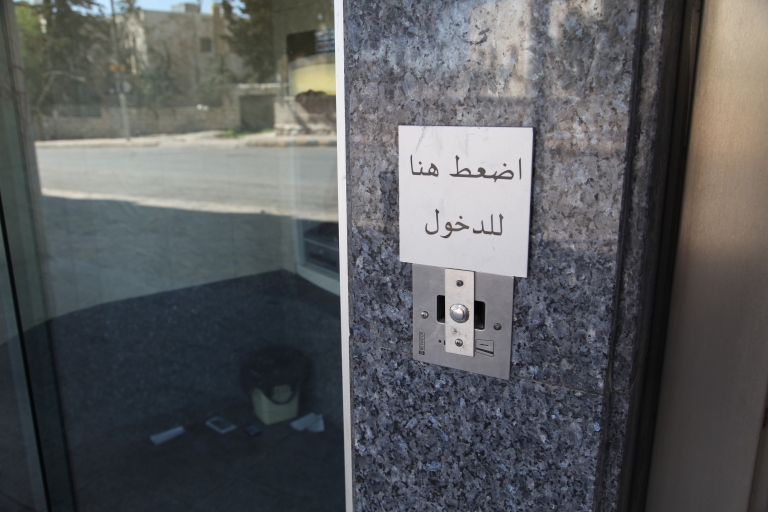 Here lies more proof of the risks of not checking one’s assumptions, and instead blindly implementing solutions that worked elsewhere. Like so many other processes that require novel behaviors for a given context, this tiny room next to a bank branch that contains the branch’s ATM in Jebel Weibdeh, Amman shows that you can have all of the complicated, tech-dependent “moving parts” in place – the motor for the door, electricity, localized software and physical interface for the ATM, etc. – and yet still have a critical moment in your service fall flat when customers can’t figure out how to open the door to get at your ATM.

Yet it’s hard to fault the people who designed this particular space/moment/touchpoint. The idea of a “door” was once as a simple, fairly-tightly-scripted object with a binary function (putting aside Latour’s fascination with the “door-closer” of his building in his piece “Mixing Humans with Non-Humans”, which I’d heartily endorse taking a deep dive into). This door (and accompanying controlled space of the “ATM room”) proves this no longer to be true. For non-cardholders, this door and space essentially do not even exist (nor need they exist) – the act of accessing and using this tiny room is not a concern to the 70% of Jordanians who do not have bank accounts. On the flip side, there must be some social status involved for those with both the know-how and resources to understand and operate the door, enter the space, and withdraw money.

Traditionally, doors determined who could enter or exit them by mechanics such as physical locks, granting the keyholder entry and control over it. Now, things have moved beyond the physical and the visible to entirely new codes and behaviors required for entry. Proof of this novelty lies beneath the push button in the form of the engraved icon of a credit/debit card (or what you, dear reader, might immediately identify as a credit card). This apparently less successful door-opening behavior must have bedeviled a sufficient number of people to have caused the powers that be to install the button. Ponder for a moment what would constitute a “sufficient” number of people in this case – the individuals who are both savvy (and wealthy) enough to have a debit card, but insufficiently familiar with their use not use as a means of unlocking funds from an ATM but of unlocking the door required to access said ATM.

Or, the cardholder in question could fully understand what is required of them to open this door and access the ATM, but understandably object to the idea of inserting their card into something that, were the slot to ingest the card and not return it, would be rather hard to reason with. In speaking with Jordanians over the course of research there, the emphasis upon the importance of face-to-face interactions over phone- or machine-based ones – particularly sensitive around matters of money –  made it clear that while the financial service we were designing could include digital touchpoints, without the support of a human being to explain and support them, they (and in turn the entire service) would fall flat.

Finally, this could all be one protracted red herring, and the door’s card-reader could have failed due to a sand-related shortcoming. Either way, a helpful reminder of the consequences of inadequate consideration of context and its constraints – whether human-made or natural – and the potential implications for a service’s touchpoints.

One thought on “Contextual constraints”