As in many places elsewhere, the Mercedes brand is shown high esteem – here, the owner of this truck has decked their vehicle out not only with the prominent (and seldom seen) Mercedes brand lockup (raising the question of for whom this message is intended), but also the colors of the German flag. Paired with this show of pride in car brand appears another recognizable and high-status brand – what some might think of as the Mercedes of consumer electronics, perhaps? There exists also a tree that evokes the Lebanon cedar at the center of the country’s flag, a tree with a geographic distribution that may well resemble the spread of vintage Mercedes as the vehicle-of-choice across the region. As Janchip has observed, the early-model Mercedes serves as the de rigueur means of getting around for others in this region as well.

Rather than a game of “one of these things is not like the other”, consider the statement the person who decorated this truck was making – political or otherwise – and the inherent risks (and plausible deniability) of decorating one’s vehicle in such a way.

While the vehicle vintage remains fairly constant in Jordan, condition varies considerably, with some cars looking like they’ve rolled off the factory floor yesterday (despite being nearly 40 years old), and others appearing to have arrived fresh from a small-arms skirmish in the middle of a sandstorm (not entirely implausible considering the geographic context).

The above sterling example of the former was parked nearby our pop-up studio in Amman, and one of our team members saw its owner polishing it as he stepped out to pick up breakfast one morning for the rest of us. Rituals of care prevail here, even in the season of sandstorms.

That said, our local team members shared how replacement parts for the older Mercs have become expensive in the country as of late, making it more difficult to keep them on the road (reminding me of my former boss in Myanmar before the recent round of economic reform and opening, when parts were scarce and he was forced to retrofit Toyota parts to power his late 80’s Mercedes 300). Beyond the status concerns of Jordanian youths, we also heard how many new drivers today are gravitating towards higher gas mileage vehicles, choosing from an array of economical Japanese imports over these venerable Teutonic beasts of the pavement. 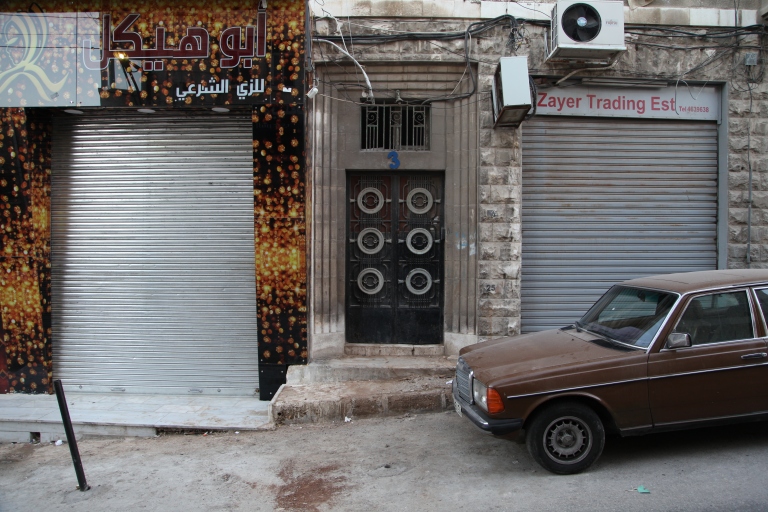