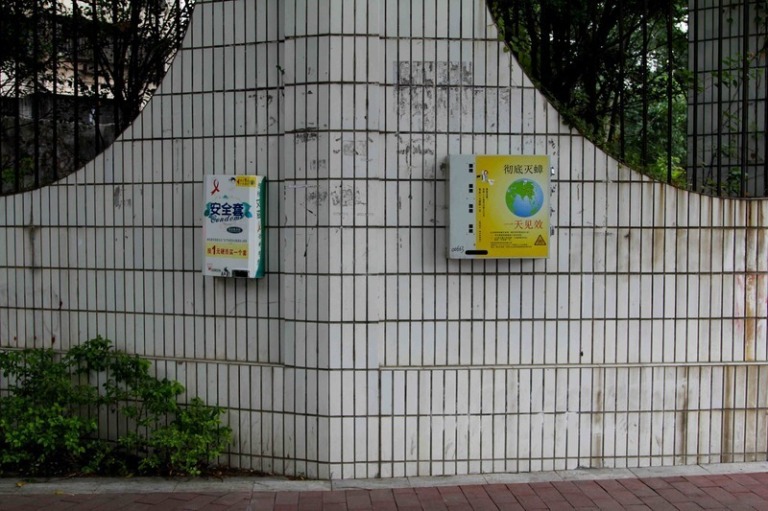 The white machine on the left dispenses condoms, while the one on the right dispenses pesticide bait (targeting cockroaches, specifically). Both require a single 1元 coin (US $0.16), markedly limiting the potential for spontaneous purchase by passersby (carrying 1元 coins is not particularly common in Shenzhen – the proliferation of coins varies across China). Some context: These are in Shenzhen, across from the main entrance to a middle school in the district of Nanshan which, at this time in the afternoon, had a relatively high number of lingering parents/nannies waiting to pick up children.

Nearby shops and vendors are likely aware of the existence of these machines and their requirement for coins – personally, the temptation would be too great to resist as I attempted to judge which of the two products a given individual asking for coins  (regardless of whether they wanted either, and simply needed the coins for another purpose). Is the middle-aged woman dressed in a conservative pantsuit and toting a (real?) Louis Vuitton bag interested in obtaining coins for contraception or pest eradication? If contraception, for intercourse with her husband – or someone else? What about the man in his 20’s with the gelled coiffure and stud earring? Perhaps he needs both in anticipation of a date he’s got this weekend where a clean (pest-free) apartment is a priority (in modern Shenzhen, a city comprised mostly of internal immigrants from across China, the tradition of living with one’s parents has necessarily been suspended, and while some residents opt to live with colleagues or friends, others choose a space of their own).

Lack of distinctive branding on either machine would likely mean negative implications for trust. While those seeking cockroach bait may not have such high thresholds when weighing purchase options, with no permanent harm done if it fails to work as anticipated/advertised. Condoms are a different story, however – failure brings potentially greater repercussions (side note – consider the ethical implications involved in developing a condom designed to break, along with potential use cases).

Consider also the implications in this context of being seen by acquaintances (or even random passersby) making either purchase. These factors don’t seem to have been too closely considered in the placement of such machines – the condom dispenser is positioned along the more crowded segment of the sidewalk, whilst the pest bait machine hides somewhat more subtly around the corner (though still in relatively plain sight due to the paucity of tree coverage).